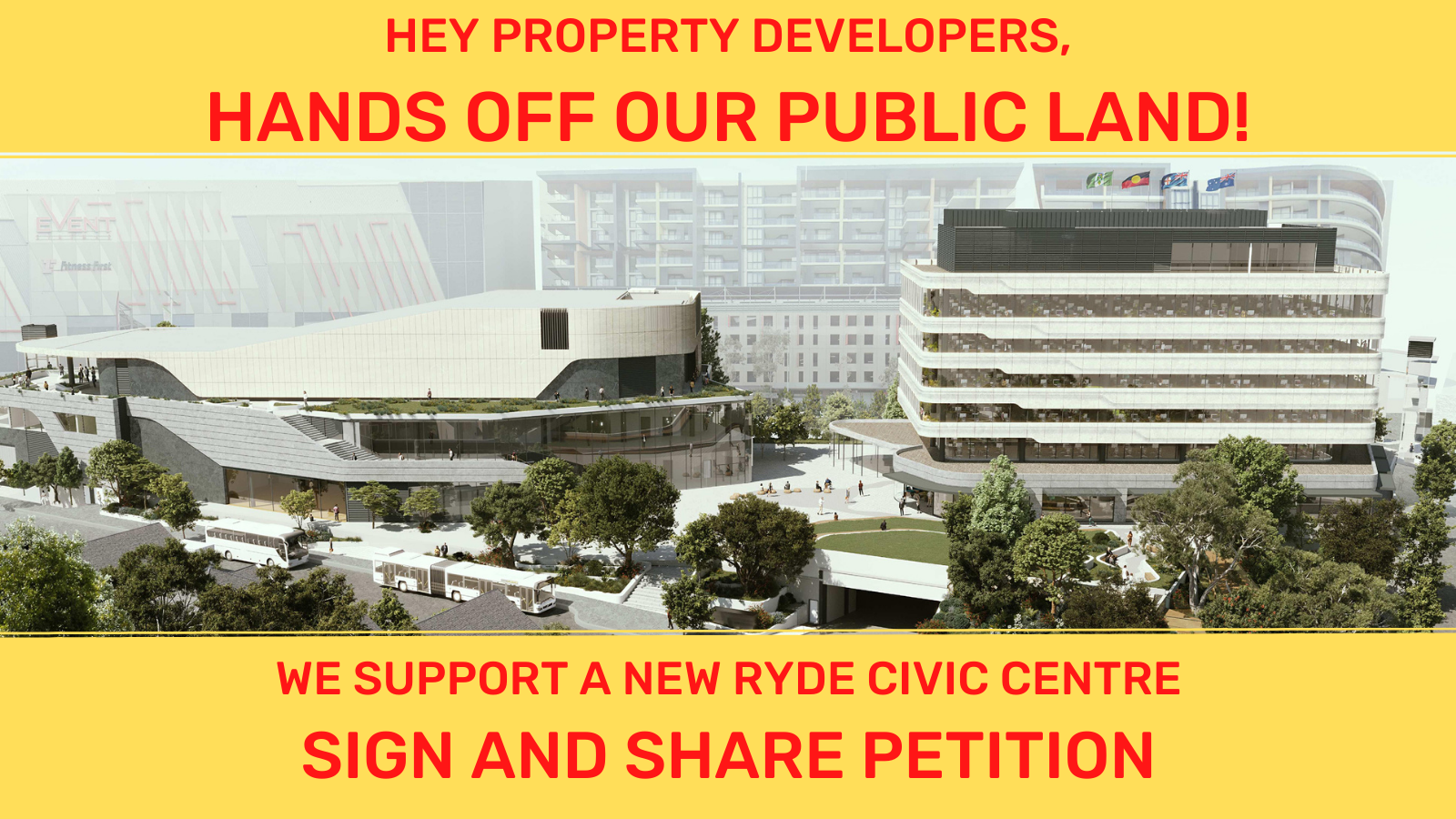 In an extraordinary and sudden turn of events the NSW Government, at the behest of property developers, have placed a 40 day stop work order on Ryde Central. Make no mistake, this is an attempt by developers to stop Council's wildly successful and popular proposal to build a community and cultural facility on site without any residential apartments.

Developers want to stop this build so that they can have another shot at building apartments as they tried to do in 2010-2012.

There are so many unanswered questions.

Why did the NSW Government ignore 85% of local Ryde residents who support our plans to replace the civic centre with a cultural and community hub?

Why was a stop work order issued 1 day before demolition was meant to begin, when we have been planning this project for 10+ years?

How can this happen when approval was given to demolish the site, by a NSW Government planning panel, in October 2020?

Why did the Government do this at the behest of a property developers lobby?

As we try to get answers to these questions and resolve this matter as quickly as possible, I need you to sign and share below petition so that we can get on with building our 100% community owned Civic and cultural hub, without any residential apartments.

This petition will be presented to the Chair of Heritage NSW who made the stop work order on Friday 26 February 2021.

I urge you to quickly lift the stop work order that you issued on 26 February 2021 prohibiting work on the Ryde Civic Centre.  I support the Council's plans to replace the current building with a state of the art community and cultural hub.

The new building, approved for demolition and construction, has been designed to a high architectural standard and I concur with the unanimous decision of the Sydney North Planning Panel and their reason stating that "The development is of high-quality architectural design that has responded to the location within the mixed-use area, while providing a form of development consistent with the character of the precinct."

Further, I agree with their reason for approval that "The proposal will result in redevelopment of the site to provide a new 'Civic Heart', which will make a positive contribution to the Ryde Town Centre"

I believe that the current building has no historical significance at a local or state level. It is too small, it is dangerous, it has been empty since 2015 and it is past its use by date. The building cannot adequately serve our growing community. Further, heritage matters have been considered over and over with no major objection from those who will benefit from the new facilities, citizens of Ryde. Our community supports its demolition and replacement.

Ryde is a growing city and the new faciility proposed by Council is overwhelmingly supported by our community. Unlike previous development proposals, we have been involved at every step with this one. The inclusion of a performance hall, an art gallery and meeting rooms will help meet the needs in our city for accessible and affordable community space.

Our city has been waiting for this day for over 10 years. Together we fought plans to build 2 x 24 storey towers on the site in 2010-2012, and we fully support the current plans to replace the building with a development that has no residential on the site. Ryde is already over-developed, and a Civic Centre that is 100% Council owned and that serves our community in every aspect is very welcomed.

Mr Howarth, property developers have no right in determining the future of this site. We have fought hard to keep them from building apartments here and are proud of our plans to replace the old Civic Centre with something that can truly serve our city.

I support the construction of a new public building at the Civic Centre. I urge you to quickly lift this order and put our interests ahead of those of property developers.

Barry Hadaway signed Ryde Civic Centre 2021-03-10 20:55:56 +1100
As a former long term Ryde resident I am appalled at attempts to block the construction of the community and cultural centre. Deverlopers having trying to get their hands on this important site/community asset for years. They should be rebuffed if not jailed for corruption!